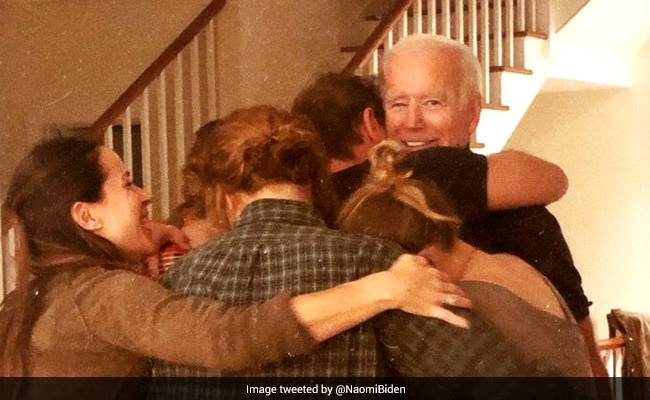 In Naomi's photo, Joe Biden smiles at the camera as his family members embrace him.

When Joe Biden was declared the next President of America after a crucial win in battleground Pennsylvania, his family wrapped him in a group hug.

That moment of pure joy and family celebration was tweeted by the President-Elect's oldest grandchild Naomi Biden.

Joe Biden's victory in one of the most polarized elections in America came after the US media showed him winning Pennsylvania and gaining more than the 270 Electoral College votes needed to secure the presidency.

In Naomi's photo, Joe Biden smiles at the camera as his family members embrace him.

Naomi is the 27-year-old daughter of Joe Biden's son Hunter and his first wife, Kathleen.

She is named after Hunter Biden's sister Naomi Christina, who was killed in a car crash with her mother in 1971.

According to the US media, Naomi is the only Biden grandchild who has a public Instagram account.

Her Twitter bio describes her as "sister, daughter, granddaughter..."

Biden, 77, will be the oldest president-elect in US history and the first to oust a sitting commander-in-chief after one term since Bill Clinton defeated George H.W. Bush in 1992.

Over 700 Gang Members In Central America Arrested In U.S.-assisted Actions