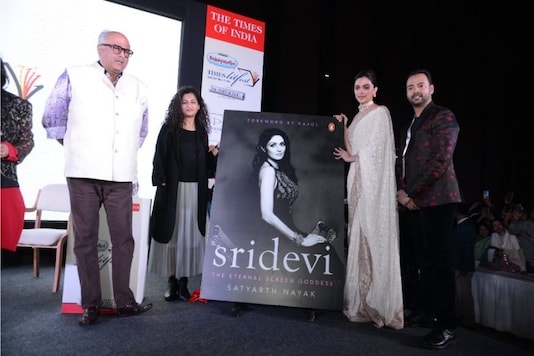 Legendary actress late Sridevi's biographer Satyarth Nayak talked about many questioned that he had in mind to ask the actress but could not due to her untimely death in February 2018.

Author Satyarth Nayak, who has penned the biography Sridevi: The Eternal Screen Goddess, says he had too many questions in his mind about the late legendary superstar, adding that her sudden demise broke him so badly that he wanted to give up the idea of writing the book.

Asked if he would have preferred an insightful conversation before writing the biography, as he was appalled that there is no good book on his favourite superstar Sridevi, Nayak told IANS: "That was the original plan. In 2017, after I was sanctioned by Penguin Random House, I had word with Boney (Kapoor) sir and Sridevi ji. She said that she was quite occupied with (daughter) Janhvi's debut. Around that time Janhvi had signed ‘Dhadak'. Sridevi ji said that once the film was released, she would be free and we could down for the book."

"I was shattered. I was emotionally broken and told myself I can't do this anymore. I wanted to talk to her. I wanted to know so many things about her. There was a list of questions in my mind but now these questions would remain unanswered," said Nayak.

However, according to the author, Sridevi's husband Boney Kapoor and the publishing house of the book encouraged him to get over the shock, and Nayak went on to interview around 70 actors to get material for a tribute to his favourite actress.

So, what were the questions Nayak wanted to ask Sridevi? "I think an artist of her calibre could have avoided some of the film that she did in the nineties. I know that in some of her interviews she said that she was not getting her choice of roles. I wanted to know, why did she not explore arthouse cinema at that point of time and work with filmmakers like Govind Nihalani and Shyam Benegal? We could have seen a different side of Sridevi in such films," he replied.

Like most of her fans, even Satyarth liked Sridevi in films such as Solva Sawan, Mr. India, Sadma, Chandni, Nagina and Himmatwala.

"But I also wanted to ask why she acted in a film like Roop Ki Rani Choron Ka Raja. However, a person like me, who admired her as an actress, can only wonder, but in the rest of my book, I have paid tribute to her," said the author.

While it is easy to assume that, like any other average fan, Nayak liked the dazzling smile, dancing skill and screen presence of Sridevi, the author shared his reasons for admiring the actress: "It is so much easy these days to talk about pay disparity, substantial roles for women in cinema and so on. Sridevi, at the top of her game in the eighties and the nineties, dealt with misogyny, patriarchy in the film industry, and how. She was one of those successful heroines who stood her ground on getting substantial parts in film instead of just an elementary presence that was the common practice of that era.

"In a film like Chaalbaaz, two heroes like Rajnikanth and Sunny Deol were supporting actors and in the poster, her picture was bigger. She brought back the glorious days of fifties and sixties when women used to get meaty roles. Most interestingly, she has done it all in a commercial space. She was a female superstar by all means," pointed out the author.