Sonam Kapoor's Throwback Pic is All About Her Love for Reading 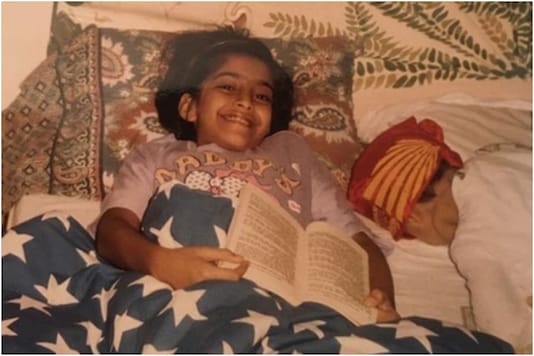 Sonam Kapoor says she is bookworm as she posts a throwback picture on social media.

Bollywood actress Sonam Kapoor on Friday took to Instagram to upload a childhood picture of herself.

In the throwback picture, Sonam is seen lying on the bed with a book in her hands. Through her post’s caption, the 35-year-old actress revealed she has been a voracious reader since her childhood days.

Captioning the post, Sonam wrote, “Nothing has changed since then once a (bookworm) always a bookworm."

On June 9, Sonam turned 35 and celebrated her birthday with her family in Mumbai. To make the day special, Sonam’s husband Anand Ahuja surprised her with a picture comprising her friends and family members.

Posting the picture, she wrote, “Thanks for coming together for this my friends/fam/team.. I love you all. Also thanks my darling @anandahuja for putting this together.. You’re the best in the whole wide world.. @neeha7 thank you for helping anand and giving me you unconditional support and love. I’m too blessed to be surrounded by the most amazing people. I love you all. You know who you are. This has been the most awesome day ever.”

Meanwhile, on the work front, her last movie was The Zoya Factor. It starred Sanjay Kapoor and Angad Bedi in lead roles. The film was directed by Abhishek Sharma.