In 1955, a young Shantha Ragavan from Thanjavur visited her grandmother in Madras and learnt to cook.

Her grandmother oversaw her roasting a small pumpkin on the stove, which was then immersed in water to remove the skin. On an ammi (a traditional stone slab used for grinding) she ground sautéed dried red chillis, a ball of tamarind and salt. She added the peeled pumpkin and ground again, thus making her first-ever dish — pumpkin thogayal. Her father-in-law dotingly named her vaathiyar (master) for her cooking prowess with dishes like kondakadalai kozhambu (chickpeas), arisi vadai (rice vadas) and pongal.

Sixty-five years later, Shantha has made her YouTube debut with her grandson, 24-year-old singer RP Shravan, to document the recipes she learnt in her early life. Their channel is called Shantha Paati Samayal, and Shravan curates, shoots and edits on his smartphone.

An ardent singer, first runner-up in Super Singer Season 2 and among the top seven in Indian Idol Season 9, he sings popular devotional songs for his grandmother’s videos, amalgamating the music with her recipes.

From 2,000 subscribers in 2019, the channel has 88,000 subscribers now, drawn in by 34 videos that detail out not only recipes but also other kitchen tasks. The most watched video, with over 7.6 lakh views, is on How To Cut Cabbage.

Shantha uses lucid and conversational Tamil while explaining the recipes (there are subtitles for those who do not understand), and Shravan clears doubts from the background.

He says, “I try to figure out possible doubts and spontaneously ask paati, for the benefit of newbies watching the videos, who may have similar questions.”

Shantha finishes her shot in one take, without any script. She says she owes it to her acting experience, as the heroine’s grandmother in Tamil film Thirumanam Ennum Nikkah.

In every video, she insists on one important aspect — zero wastage. When making arisi vadai, buttermilk invariably remains as a leftover. She urges her viewers to soak chopped banana stem in that buttermilk, to retain their colour, instead of throwing it away. She also narrates a life experience with every dish. Many comments read, “Watching paati gives us immense pleasure, like seeing our own.”

Says Shravan, “Festivals are classified based on gender, like Navratri being a women-centred one. To break that stereotype, I am cooking in this series.”

Shantha is proud of her grandson’s finesse in cooking: “Shravan learns the recipes just by observation. The house is filled with the aroma of the rasam he makes.” Shravan adds, “Before learning music, I used to play with cooking vessels as a toddler, and peek at my grandmother’s cooking in the kitchen.”

Shravan and his paati are now chalking out a Deepavali series, where they will be making sweets and savouries. Before that, they plan to post a video on puliyodarai, which is repeatedly requested by viewers.

The project takes effort, but Shantha is clearly enjoying the process. She says, “When I saw the first video of my recipe, I became so excited that I felt my age reverse to 18 from 81.” 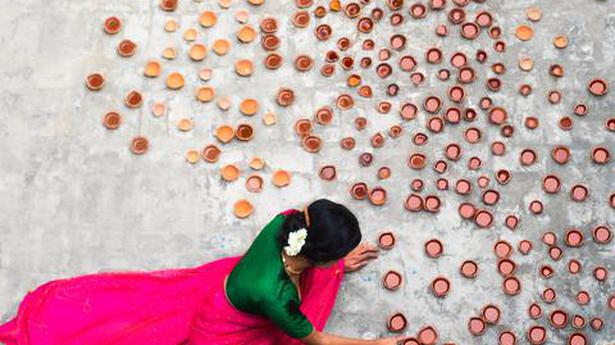