WASHINGTON: The Latest on the 2020 House races (all times local):

Hinson is a former television news anchor. She won the U.S. House seat after a race in which she stressed the need for lower taxes, smaller government and border security.

Finkenauer lost in her first bid for reelection following her victory in 2018 over Republican Rod Blum. During her freshman term, Finkenauer devoted much of her time to ensuring disaster relief to her district after a damaging 2020 wind storm. She also supported legislation designed to help small businesses, aid governments amid the coronavirus

The 1st District covers 20 counties and the cities of Cedar Rapids, Dubuque and Waterloo.

HERES WHAT YOU NEED TO KNOW ABOUT THE 2020 HOUSE RACES:

Democrats are pushing to seal control of the House for two more years, banking on their health care focus, dominant fundraising and suburban indignation with President Donald Trump.

HERE’S WHAT ELSE IS GOING ON:

Boebert was a first-time candidate for public office. She soundly defeated Tipton, a co-chair of President Donald Trumps Colorado reelection campaign, in the Republican primary in June.

Boebert closely allied herself to Trump, assailing Democrats on everything from what she called job-killing proposals on fossil fuels to coronavirus

restrictions to unrest in Democratic-led cities. She voiced praise for the QAnon conspiracy theory during the primary but has since distanced herself from it.

She pledged to protect gun rights and appeared at her rallies with a Glock pistol strapped to her hip.

An Oklahoma Republican has defeated Democratic congresswoman Kendra Horn and taken back the only Democratic-held seat in the states congressional delegation.

Republican state Sen. Stephanie Bice earned a reputation as a political moderate in her two terms in the Oklahoma Senate. She wrote a series of bills to help overhaul the states antiquated alcohol laws and invited a Hindu leader to deliver a prayer after the Legislature faced criticism for its lack of religious diversity.

Horn narrowly won the Oklahoma City-area House seat in 2018 in a district that President Donald Trump had won two years earlier by nearly 14 percentage points. Horn tapped into a network of enthusiastic women and young people in increasingly diverse Oklahoma City and pulled off one of the midterm elections biggest upsets.

But Republicans outnumber Democrats in the district, which includes several traditionally conservative suburbs and two rural counties. Before Horns election, it had been in Republican hands for four decades.

Republican Yvette Herrell has won an upset victory for a House seat in New Mexico.

Herrell, a real estate agent, defeated freshman Democratic Rep. Xochitl Torres Small in a 2018 rematch to flip the 2nd District seat that represents the southern half of New Mexico.

Torres Small ran a campaign in the traditionally conservative-leaning district as a moderate who has challenged her partys stances on issues including oil and gas development.

While Torres Small maintained a fundraising edge throughout the race, Herrell received a surge in donations during the third quarter. She raised more than $1 million one of the biggest fundraising quarters for a Republican congressional candidate in state history.

Mace is a state lawmaker, and she beat Cunningham in a seat Republicans had vowed to flip back after the Democrats win in 2018. She will be only the second woman to serve in the House from South Carolina.

President Donald Trump supported Mace on Twitter and she once worked on the presidents campaign. But, while trying to link Cunningham to House Speaker Nancy Pelosi, Mace stayed fairly quiet about Trumps support for her. Anger at the president helped Cunningham win in 2018.

The congressional district stretches from Charleston to Hilton Head Island along the states coast and is richer, more educated and less conservative than much of South Carolina.

The chairman of the House Agriculture Committee, veteran Democratic congressman Collin Peterson of Minnesota, has lost his bid for a 16th term.

Fischbach contended that Peterson was too close to Democratic House Speaker Nancy Pelosi and other liberals.

Peterson rarely faced serious challenges in his career. His sprawling district stretches from the Canadian border almost all the way south to Iowa, and it has become more Republican over the years.

Peterson was first elected in 1990. He chaired the Agriculture panel from 2007 to 2011 and regained the post after Democrats recaptured the House in 2018. He was instrumental in shaping several farm bills and was a champion of the regions beet sugar industry.

A Georgia state senator has been elected to the U.S. House to replace the late congressman John Lewis, a civil rights icon who died in July.

Georgia state Sen. Nikema Williams is the chair of the Georgia Democratic Party. She beat Republican Angela Stanton-King in the Atlanta-based district.

The 42-year-old Williams is set to join two other Black women, Atlanta Mayor Keisha Lance Bottoms and 2018 gubernatorial nominee Stacey Abrams, as among the states most recognizable, influential Democrats.

The 43-year-old Stanton-King is a reality TV personality and outspoken supporter of President Donald Trump.

A special election runoff to become Lewis short-term replacement takes place next month, but the winner of that race will only be in Congress until Williams is sworn in on Jan. 3. Neither Williams nor Stanton-King is running in the special election.

Salazar, a Spanish-language television newscaster, won in her second try for the office after Shalala prevailed in 2018.

The district covers much of the central Miami area and has generally been considered Democratic. Salazar sharply criticized Shalala for failing to timely report several stock sales as required.

Salazar, a Cuban-American, attacked Shalala for comments in which the incumbent called herself a pragmatic socialist. Shalala later said she meant to say she was a pragmatic capitalist.

Salazar said, We know that socialism, it means burning hell.

Ross was helped by new boundaries in the Raleigh-area district.

The seat is currently held by Republican Rep. George Holding, who announced his retirement last year.

Ross, a lawyer, is a former member of the North Carolina House, where she served as majority whip and in other leadership roles.

Ross most recently ran for elected office in 2016, when she failed to unseat Republican Sen. Richard Burr.

Gimenez, a former firefighter, prevailed in a district that stretches from the Miami suburbs to Key West. The seat has swung back and forth between Democrats and Republicans for several elections.

The Cuban-born Gimenez was helped by President Donald Trumps strong appeal to Cuban voters. Gimenez made restoring the economy amid the coronavirus

pandemic one of his top campaign issues.

Florida has long been a COVID-19

Mucarsel-Powell, who is originally from Ecuador, also stressed recovery from the pandemic as a major priority.

Mannings victory in the states 6th Congressional District was expected after a court ordered the state to redraw its congressional map ahead of the 2020 election. Republican Rep. Mark Walker did not seek reelection after the order.

The pickup by Manning in the area that borders Virginia furthers Democrats goal of retaining their majority in the House. Manning, an attorney and small business owner from Greensboro, unsuccessfully ran in 2018 for the seat in District 13, where she lost to Republican Ted Budd by 6 percentage points.

Haywood is a GOP activist who previously worked as the party chairman in the district.

Republican Ronny Jackson has won a House seat in West Texas, where he moved after leaving the White House in 2018. The solidly Republican district is currently held by Mac Thornberry, one of six GOP congressmen in Texas retiring this year.

Jackson was a surprise pick by Trump to lead the Department of Veteran Affairs in 2018. But his nomination was derailed by allegations of drinking on the job and over-prescribing drugs, claims that he has strongly denied. 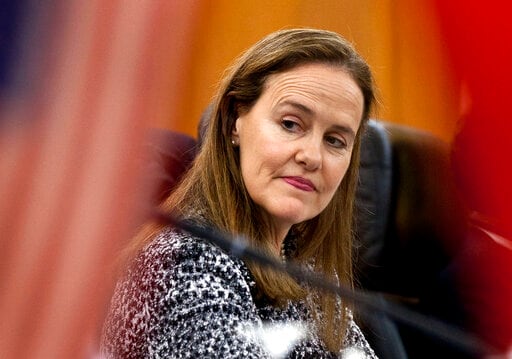