From Land of Uma Bharti in Bundelkhand, Congress Fields Another Bharti in Madhya Pradesh Bypolls 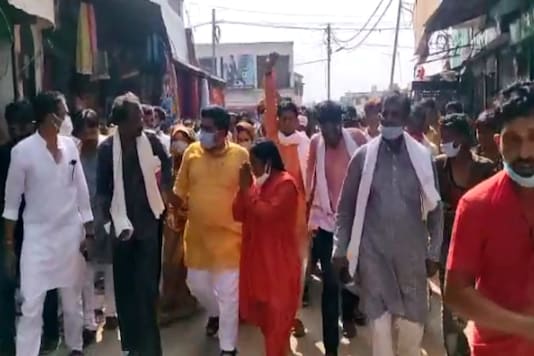 The upcoming assembly bypolls are hitting the headlines for many reasons in Madhya Pradesh but Malhera assembly seat is in the news after the Congress party choosing a katha vachak (religious narrator) by profession as its candidate.

Best known as the former constituency of erstwhile Madhya Pradesh chief minister, and firebrand sadhvi, Uma Bharti, Malhera (Bada Malhera) is going to bypolls due to the resignation of former Congress MLA Pradyumn Singh Lodhi from the party recently.

With Lodhis and Yadavs being dominant classes in the vast constituency touching the borders of Sagar, Tikamgarh and Damoh districts, candidates from either community won the seat in the past few decades including Uma Bharti in 2003 and previously her brother Swami Prasad Lodhi in 1998.

The similarities between Uma Bharti and Ramsiya Bharti also extend to them both being Lodhis and neighbouring district Tikamgarh being the native of place of both .

Ramsiya Bharti (30) who studied till class 12 has been reciting Ramkatha since the year 1996. Soon after getting a nomination from the Congress, she has kicked off campaigning in the constituency. She spoke to News18 over the phone, and here are excerpts from the discussion:

What prompted you to take a plunge into politics?

I believe that one should be driven by a sense of compassion and since I am in touch with the public as a katha vachak, locals were insisting that I should join politics for serving the region. This is why I need not do anything extra as locals already know me for years.

As you come from Malhera and are a katha vachak, are you aware that you will be constantly compared with Uma Bharti?

As a fellow sadhvi, I consider Uma ji as my elder sister and have respect for her. However, the public could be the best judge on what she did for the region; I am personally not aware of this. Plus, we have also followed different political ideologies.

What are the basic issues for this constituency?

Health and education facilities have been lacking in the region for long. Job availability has also been an issue; this is why locals had to migrate to other places in search of jobs every year in large numbers. Besides, insufficient irrigation facilities have always been a challenge for the area.

Why have things never changed in Malhera (Bundelkhand) in all these years?

Mujhe lagta hai jo bhi yahan se pratinidhi rahen hain unhone matra dikhawa kiya, kshetra ke liye jyada kuchh nahin kiya (I guess those who represented the constituency only engaged in pretention and did not do much for the region). So it's required that those engaged in spirituality serve the public and good people come forward in politics.

Do you think you can defeat the BJP candidate?

The former MLA (Pradyumn Lodhi) did wrong with the voters as he was made victorious but he switched and became a candidate of the BJP. I am sure I will win but, like the teaching of Ramcharitmanas, I believe in doing my karma.

You are also called an outsider in Malhera by some locals.

I don’t believe I am an outsider for Bada Malhera. I not only consider myself a daughter of Bundelkhand but also a daughter of Bharatvarsh. I have been living at Bamnighat since the age of four when my aunt had adopted me and brought me to Bada Malhera in Chhatarpur. I don’t think any small opposition would impact my poll as locals in large numbers claim that they are with me.