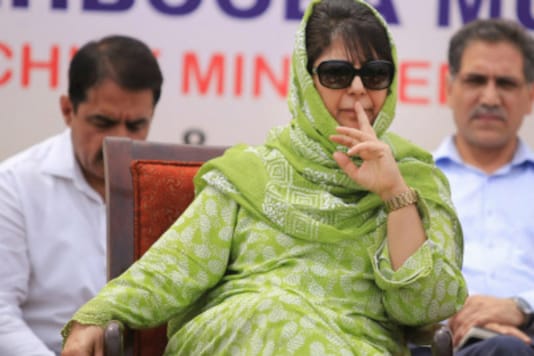 Mehbooba is under detention at her official residence in Srinagar that has been declared a subsidiary jail.

Mufti was among hundreds of people and political leaders in the state who were taken into preventive custody hours ahead of the Centre revoking the special status of Jammu and Kashmir on August 5 last year.

A government order issued on Tuesday night said her detention was being revoked with immediate effect.

The Jammu and Kashmir administration in July had extended her detention by three months under the stringent Public Safety Act (PSA).

Mufti, who became the first woman chief minister of the erstwhile state of Jammu and Kashmir in 2016 as head of the PDP-BJP alliance, was arrested along with other leaders hours ahead of the Centre bifurcating the state into two union territories and abrogating Article 370 on August 5 last year. She was first detained under Sections 107 and 151 of the CrPC but later booked under the controversial PSA.

Former Jammu and Kashmir chief ministers and National Conference leaders Farooq Abdullah and Omar Abdullah were released in March after over seven months in detention.

Mufti was initially lodged at the Cheshma Shahi guest house and then shifted to another government guest house at MA Link Road in Srinagar. She was then taken to her residence where she remained under house arrest.

Responding to the government decision, her daughter Iltija Mufti took to Twitter to thank everyone for their support. Iltija had challenged her detention in the Supreme Court, which last heard the case on September 29.

As Ms Mufti’s illegal detention finally comes to an end, Id like to thank everybody who supported me in these tough times. I owe a debt of gratitude to you all. This is Iltija signing off. فی امان اﷲ May allah protect you

Omar Abdullah, who was earlier released from detention, welcomed the move. "I am pleased to hear that Mehbooba Mufti Sahiba has been released after more than a year in detention. Her continued detention was a travesty and was against the basic tenets of democracy," he said in a tweet.

I’m pleased to hear that @MehboobaMufti Sahiba has been released after more than a year in detention. Her continued detention was a travesty & was against the basic tenets of democracy. Welcome out Mehbooba.

Congress leader Ghulam Nabi Azad described the 15-month detention as a "unique one in our country".

Thank God at last @MehboobaMufti has been released after more than15 months.This detention like that of Farooqsahib&@OmarAbdullah was unique one in our country,where the govt. ordered detention themselves don’t know reason and crime committed by these 3leaders.Jai ho democracy ki

CPI(M) leader MY Tarigami said, "We urge the authorities to release other people who continue to be under detention since August 4, 2019, under draconian laws like PSA, UAPA and sedition."

Mufti was initially detained on August 5 last year. Having spent over eight months in detention at two government facilities designated as sub-jails, she was shifted to her home on April 7 in partial relief. Initially, she was taken into preventive custody. Later on February 5 this year, she was slapped with the PSA.

Mufti heads the PDP, which was in power in Jammu and Kashmir in alliance with the BJP till June 2018.