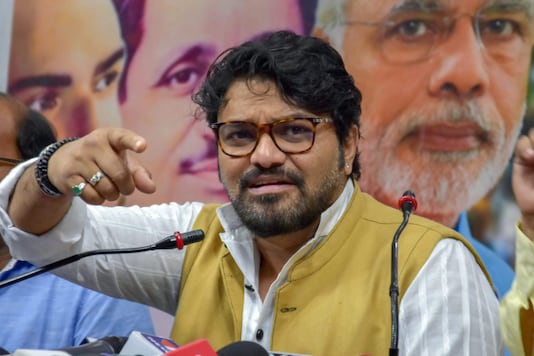 In big relief for Union Minister Babul Supriyo, the Calcutta High Court on Wednesday quashed a police chargesheet against him for passing ‘objectionable’ comments at TMC MP Mahua Moitra during a TV debate in 2017.

In big relief for Union Minister Babul Supriyo, the Calcutta High Court on Wednesday quashed a police chargesheet against him for passing ‘objectionable’ comments at TMC MP Mahua Moitra during a TV debate in 2017.

The key pointers of the order read, “From the above discussion, I have already come to the conclusion that the allegations in the first information report and other materials, accompanying the FIR do not disclose any cognizable offence under Section 509 of the IPC. Therefore, the chargesheet being No 27 dated March 8, 2017 filed under Section 509 of the IPC is liable to be quashed.”

Soon after the Court’s order, Babul tweeted, “Chargesheet/Case filed by #TMC MP @MahuaMoitra against Union Minister @SuPriyoBabul (unfairly) accusing him of ‘Outraging the Modesty of a Woman’, have been quashed by the KolkataHighCourt #SatyamevJayate.”

In 2017, Mahua Moitra – then TMC MLA from Karimpur Assembly Constituency in Nadia district in West Bengal – filed a police complaint against BJP MP and Union minister Babul Supriyo. Then Mahua alleged that the Union BJP Minister insulted her modesty.

On January 3, 2017, Mahua and Babul participated in a debate show on a national TV channel and during the debate Babul passed a comment saying, ‘Mahua, are you on mohua (also a local hooch in Bengal))?

Mahua found it very insulting and felt that Babul insulted her modesty. On January 4, 2017, she lodged a complaint at the Alipore Police Station. Babul was charged under Section 509 (intending to insult the modesty of any woman) of the Indian Penal Code (IPC).

On January 6, 2017, Mahua also gave her statement in front of the magistrate under section 164 of CrPC.

From investment banking with JP Morgan in New York to the corridors of Indian Parliament, Mahua voyage to the doorstep of national politics is no less dramatic than her first appearance at the highest citadel of democracy.

Moitra won the Krishnanagar Lok Sabha seat in West Bengal in the recently concluded Lok Sabha elections by defeating the BJP’s Kalyan Chaubey by a margin of 63,218 votes. She was earlier a member of the West Bengal Legislative Assembly from Karimpur in Nadia district.

Born on May 5, 1975, in Kolkata, Moitra moved to the United States with her family at the age of 15. She studied economics and mathematics at Mount Holyoke College in Massachusetts and subsequently worked as an investment banker for JP Morgan in New York and London, eventually rising to the post of the company vice-president.

In 2008, her desire to do something for her country compelled Moitra to return. A year later, she joined the Congress and worked in Rahul Gandhi’s ‘Aam Admi Ka Sipahi (AAKS) project’. Two years later, she joined the TMC and is perceived to be very close to West Bengal Chief Minister Mamata Banerjee.

Moitra courted controversy after she showed her middle finger in a debate show on national television in 2015.

In August 2018, Moitra was seen engaging in a scuffle with security personnel at the Silchar airport in Assam when a TMC delegation went to meet family members of those left out of the final draft of the National Register of Citizens (NRC).