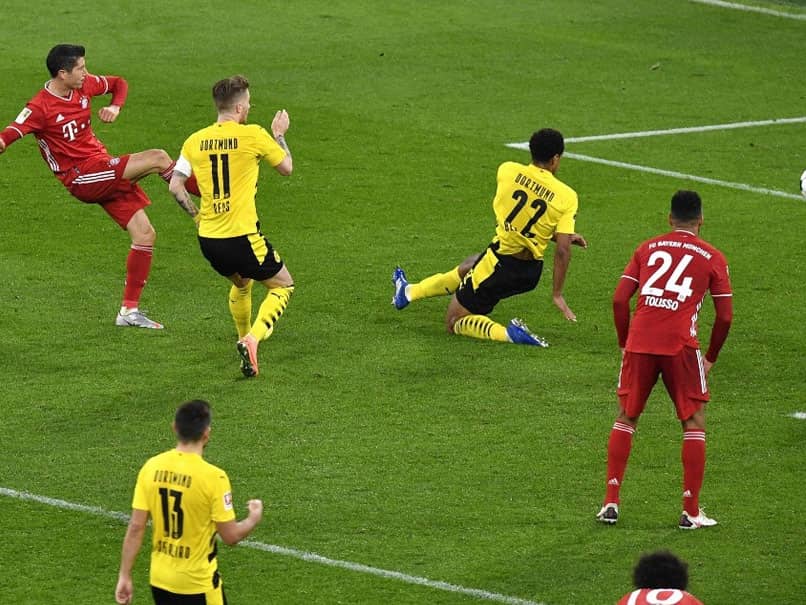 Bayern Munich went top of the table on Saturday with a 3-2 win at Borussia Dortmund.© AFP

Robert Lewandowski scored his 11th goal in just his sixth Bundesliga game this season as Bayern Munich went top of the table on Saturday with a 3-2 win at Borussia Dortmund. "In the end, we deserved the win and such victories are doubly important for us," said midfielder Leon Goretzka as Bayern saw off their rivals. After Marco Reus had put Dortmund ahead, David Alaba blasted home a free-kick to make it 1-1 at half-time behind closed doors at Signal Iduna Park. Lewandowski gave Bayern the lead with a superb header early in the second half before Leroy Sane grabbed the visitors' third.

"I have to score more goals, if we don't put our chances away at this level, then we won't win," said Haaland, who converted one of four shots on goal.

"They are the best team in the world and we have to work harder to take the next step to be as good as them".

The 32-year-old Lewandowski could have finished with a hat-trick against his former club after also having two goals disallowed by the VAR.

The away win could have come at a cost, however, as Bayern midfielder Joshua Kimmich had to be helped off in clear distress with a first-half knee injury.

"I think his knee got overstretched, it didn't look good," admitted Goretzka.

After the hosts made a bright start with Haaland firing wide, Lewandowski's effort on 24 minutes was ruled out by the VAR who spotted the Poland star offside in the build up.

Dortmund took the lead on 45 minutes when centre-half Mats Hummels sent a superb pass down the left flank for Jadon Sancho.

The England winger played Raphael Guerreiro into the area to provide the final pass which Reus fired home.

After Dortmund's midfield enforcer Thomas Delaney brought down Serge Gnarby on the edge of the area, Alaba blasted home a superb free-kick to make it 1-1 at the break.

Haaland fired wide at the start of the second half, just before Lewandowski powered home his header from a pin-point Lucas Herandez cross to put Bayern 2-1 up on 48 minutes.

Bayern had their tails up and Kingsley Coman's shot crashed off the post soon after.

Sane looked to have put the game beyond Dortmund when he cut inside, beat two defenders and fired home ten minutes from time.

However, Haaland fired home from a tight angle to give Dortmund hope while Reus volleyed wide with the goal at his mercy.

Lewandowski had the ball in the Dortmund net once more just before the whistle, only to again be denied by the VAR.

Earlier, RB Leipzig were impressive in their 3-0 home win over Freiburg.

Manchester City loanee Angelino claimed the third with a stunning free-kick which curled over the Freiburg wall just before the final whistle.

"We really deserved the win - we were very, very good in the first-half," said Leipzig head coach Julian Nagelsmann.

Union Berlin climbed to fourth with a 5-0 home thrashing of strugglers Arminia Bielefeld.

Bottom side Mainz were held to a 2-2 draw at home to Schalke, who sit one place above them and have now gone 23 games without a league win dating back to January.

After five games without a win, Hertha Berlin roared back with a 3-0 victory in the fog at Augsburg.

Forwards Matheus Cunha, Dodi Lukebakio and Krzysztof Piatek, who cost Hertha 24 million euros ($28 million) from AC Milan in January, got on the scoresheet.