Bruno Fernandes At The Double As Manchester United Beat Everton 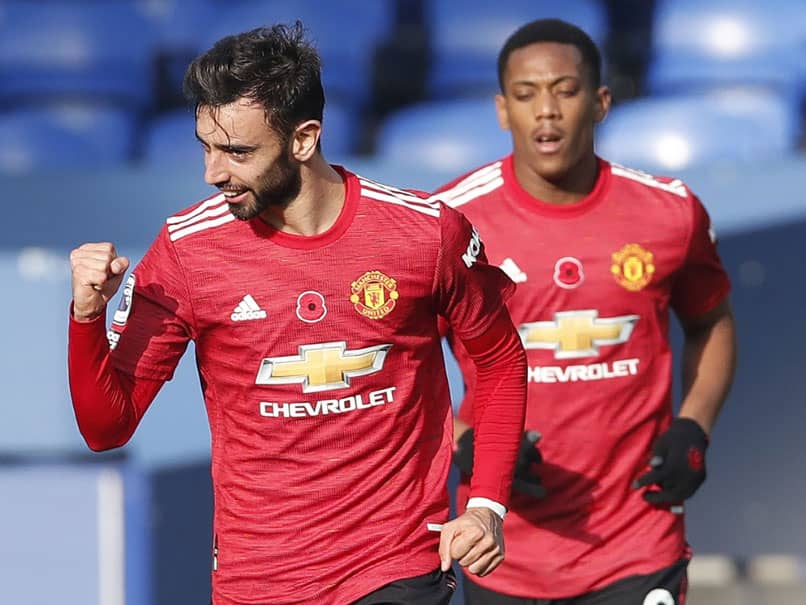 Bruno Fernandes inspired a Manchester United fightback against Everton on Saturday, scoring twice in a 3-1 win to ease the pressure on Ole Gunnar Solskjaer and deny the Merseysiders a return to the top of the Premier League. United came into the match at Goodison Park in the miserable position of 15th in the Premier League table and smarting after defeats to Arsenal and Istanbul Basaksehir. Bernard cranked up the pressure on Solskjaer by putting Everton ahead but Portugal midfielder Fernandes grabbed the game by the scruff of the neck, scoring twice in seven minutes.

Everton enjoyed plenty of possession in the second half but failed to create clear-cut chances as the early-season pacesetters slipped to their third consecutive Premier League defeat.

It was United's seventh straight Premier League away win. Their form on the road contrasts sharply with their struggles at Old Trafford, where they have not won a league game so far this season.

Bernard put Everton ahead in the 19th minute. The ball fell to the Brazilian after a long ball upfield came off the head of Victor Lindelof.

He shuffled the ball onto his right foot past Aaron Wan-Bissaka and beat David de Gea, who did not play in Turkey, at his near post.

United's heads could have dropped but they were level in the 25th minute when Fernandes, given far too much space in the box, headed a Luke Shaw cross into the top corner past the returning Jordan Pickford.

Lucas Digne had a chance to put Everton back in front as the game opened up but smashed his shot against the outside of De Gea's near post from a tight angle.

United, now playing with far more zip and purpose, were ahead in the 32nd minute. Marcus Rashford collected the ball before feeding Fernandes on the left of the box.

The Portuguese curled over a cross for Rashford, who failed to connect with his attempted header but the ball crept in off the far post.

Everton dominated possession in the early stages of the second half but United's defence, marshalled by the impressive Harry Maguire, was largely untroubled.

United had a shout for a penalty on the hour mark after a clumsy Pickford challenge on Maguire but Everton escaped.

Rashford shot straight at Pickford in the 72nd minute as United threatened to increase their lead.

Solskjaer brought on Paul Pogba and Edinson Cavani with eight minutes to go and the Uruguayan scored his first goal for United deep into stoppage time.

Kerala hotel pays tribute to Diego Maradona, turns room where he stayed into a museum

‘He can be looked at’: Sanjay Manjrekar names Mayank Agarwal’s opening partner for Test series against Australia