Book Excerpt: 'But You Don't Look Like A Muslim' Urges You To See Beyond Religious Stereotypes

Editor's Note: But You Don't Look Like A Muslim is a collection of essays by writer, critic and literary historian, Rakhshanda Jalil. Through these essays, Jalil interrogates religious identity and tries to understand how the interplay of culture, traditions and most importantly faith moulds an individual, as well as their perceived identity by the society. Jalil blends personal anecdotes beautifully to address larger and important questions about the perception of religious identities in pluralistic and culturally diverse societies of India.

The excerpts below are shared from different essays in her book, But You Don't Like A Muslim. Jalil says in her book, "I have always wondered how one is supposed to look like one’s religion. Save for outward tokens such as a turban or a topi, a beard or a burqa, how can one give instant proof of one’s religious beliefs? Yet, growing up in Delhi, all through my school, college and university, while negotiating an assortment of jobs and offices, not to say myriad social occasions, I have heard this comment delivered in tones ranging from surprise to approval."

"With time I have understood that the speaker is trying to give me a back-handed compliment. Since I don’t look like a Muslim, I am ‘okay’, I am not quite one of ‘them’ − the bomb-throwing, beef-smuggling, jihad-spouting Muslim of popular imagination. By extension, I might even − at a stretch − be considered one of ‘us’" she adds.

Here are a few more excerpts chosen from the book on various topics. 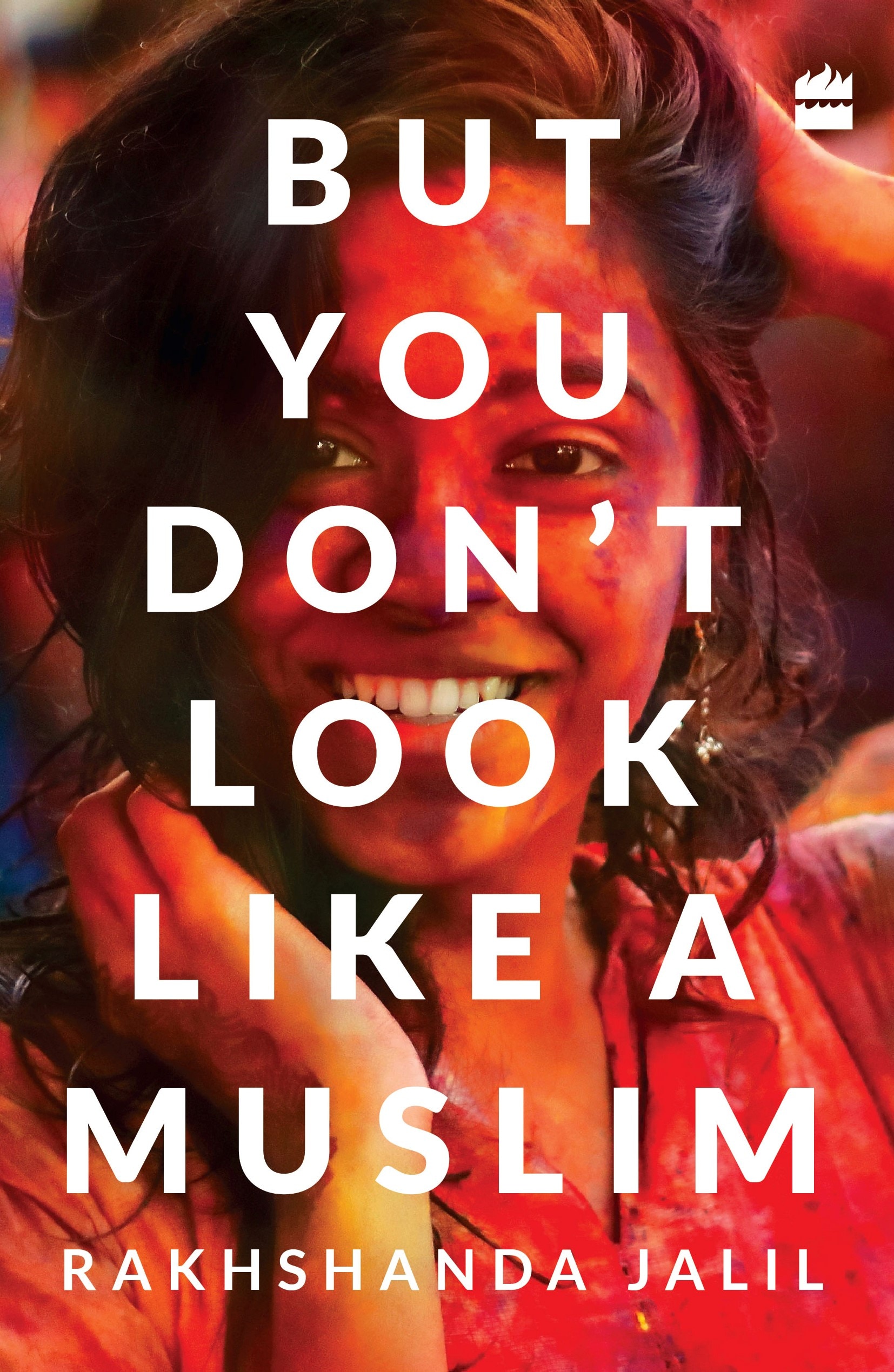 Be it films or popular culture, the demonization of the Muslims has only increased their sense of isolation and victimhood. In pre-globalization India, the film industry routinely depicted Muslims as smugglers or as paan-chewing, surma-wearing hoodlums dressed in pathan suits or as qawwali-singing debauched men who divorced their wives for the most frivolous of reasons. Post-liberalization, these caricatures were replaced by sinister dons sitting in West Asian havens planning the destruction of Indian cities and, more recently, as tech-savvy but devout Muslims who have been radicalized and turned into cold-blooded jihadists.

Subtly but surely, several motifs have crept into the public discourse such as: the strategic entrapment of Hindu girls by Muslim boys as part of a larger game-plan dubbed ‘love jihad’; the blithe disregard for Hindu sentiments in killing and consuming cows for meat; the sheer nuisance of causing a law-and-order situation every Friday when Muslims congregate in large numbers and listen to khutbas about all sorts of regressive things such as ‘don’t take your kids for polio shots’ or ‘don’t put your money in banks as interest is haraam’; their refusal to sing ‘Vande Mataram’ in a blatant display of their innate anti-nationalism; and so on and so forth.

While the entire Muslim community has suffered because of this steady infiltration of misconceptions and piling up of images and ideas − each more offensive and alienating than the other − a culture and way of life too has suffered due to this stereotyping. Urdu, which has no mooring in Islam, is identified with all Muslims − completely ignoring the fact that Muslims in Kerala speak Malayalam, those from Assam speak Assamese and so on.

Popular culture has long depicted Urdu poets and nawabs as sorry creatures steeped in nostalgia and pathos or, worse still, romanticized sherwani-clad heroes and heroines in ghararas in what were once euphemistically called ‘Muslim socials’. When not banal or limiting, some depictions are outright offensive, such as the recurring representation of Muslims as pillaging invaders who looted and burnt temples or lascivious medieval sultans lusting after chaste Rajput queens when not tearing off chunks of raw meat with their bare teeth like savages. Is this forsaking of reality for an erroneous perception not tantamount to aggravated assault? Is this deliberate othering not a form of violence: a violence to the mind and spirit?

On a personal note, my own experiences of enforced burqa have simply strengthened my antipathy to the very notion of veiling and the ‘violation’ and ‘subservience’ that inevitably follow. I have come to believe the axiom: that which is separate is inherently unequal. And the segregated are invariably regarded as somehow inferior by the other. In the context of our own history, just as the colonial powers decreed a separate space for the ‘natives’ by segregating them from positions of power and relegating them to a state of subservience, in much the same way women have been isolated and marginalized by patriarchal systems. While, according to the tenets of Islam, women are equal to men – as believers – it is custom and practice that has made them inhabit a separate space. The Islamic discourse of ‘Separate but Equal’ has unfortunately come to be hijacked by the fundamentalist discourse of ‘Separate and Inferior’.

In the year 2007, I was invited by the Kingdom of Saudi Arabia as part of a six-member delegation. Virtually from the time I – the only woman in the delegation – was asked to wear a scarf over my head and don the all-encompassing abaya before stepping off the plane and being shepherded into a women’s-only lounge at the airport to my experiences over the next five days, the fine line between discrimination and seclusion kept getting blurred. Soon, this began to give rise to a sense of being victimized and marginalized even among my own group. Much to the discomfiture of my male colleagues I began to feel slights were none were intended. The black, all-enveloping abaya and hijab – that one had to wear absolutely everywhere – were not merely a nuisance for one not accustomed to the numbing anonymity they bestow; they were also deeply annoying tools of exclusion. Every time our small group of six set off for a meeting, I would be lead to a screened-off space and given no opportunity whatsoever of interaction let alone fruitful discussion. After a while it began to seem futile if not outright offensive. To be an invited guest and yet face extreme seclusion when it came to interacting with male counterparts is not too conducive for fostering equality, integration and the easy equivalence one tends so much to take for granted as a working woman in India. Eating a ten-course meal in solitary splendour and eavesdropping on the conversation of one’s male colleagues from behind a screen, too, is less than appetizing. Less invigorating is the stifling blackness of the abaya and the hijab; it smothers and numbs. Worse still, its dense blackness turns it into a portable inferno. At such times, the only thought in my head was: I wish the men were to wear it occasionally; then, they might know how it feels.

On the Ramayana in Urdu

My mother remembers watching Ramlila tableaux in Lucknow where the actors spoke in immaculate Hindustani interspersed with flowery Urdu verses. By my childhood, as Urdu became Muslim and Hindi became Hindu, and Hindustani became a casualty of their war, the secular elements had leached out from the Ramlila and while still a fairly inclusive community-based neighbourhood celebration, it had become a religious festival. By the time I began taking my children to the Ramlila pandals, Bollywood had taken precedence over all else; the scale and spectacle dwarfed the content and the dialogue, when not drowned by ear-splitting music, which too seemed to be inspired by poor Hindi films. The early influence of Parsi theatre, the florid Hindustani dialogue, the Urdu verses − not a trace remained.

Versions of the Ramayana in Urdu − in both prose and poetry and as transliterations, transcreations and translations − have been appearing since Urdu gained popularity several centuries ago. According to a comprehensive study of Ram kathan in Urdu by the late Ali Jawad Zaidi there were over 300 such versions, many from the Awadh region alone, and several written in the style of marsiya-goi popularized by Anees and Dabeer. The earliest Urdu translation of the Ramayana by Munshi Jagannath Lal Khushtar was published by the Newal Kishore Press in 1860. Beginning with ‘Bismillah ir Rehman ir Rahim’, the Khushtar Ramayana, as it came to be called, presents an ankhon-dekha haal (an eye-witness account) albeit in a florid style. The Khushtar Ramayana was followed by Amar Kahani by Jogeshwar Nath ‘Betab’ Bareilvi and scores of others, often known by their author’s name such as Ulfat ki Ramayana or Rahmat ki Ramayana.

With Urdu gradually freeing itself from its ‘Muslim’ tag and reclaiming its rightful place as a people’s language, perhaps it is time to revisit these manzum Ramayanas and, perchance, stage a Ramlila on Ufuq’s Ram Natak. Written by both Muslim poets and non-Muslims at a time when inclusion and pluralism was the norm rather than the exception, they need to be revived and reread not merely for their evocations of communal harmony and goodwill, but also because many contain some fine poetry.

While, on the one hand, the importance of Urdu and Urdu writers to the national mainstream is acknowledged in many ways and at different levels – with Urdu writers and poets such as Shahryar, Ali Sardar Jafri and Qurratulain Hyder being conferred the prestigious Jnanpith Award, the country’s highest literary honour for a creative writer, and several noted Urdu writers being annually felicitated by the Padma awards by the Indian government − we also have a substantial number of ‘prophets of doom’, those who declare that Urdu is dead or dying. Given the extreme views, it is important to reflect on the position of Urdu in our lives today. Is Urdu confined to ‘gajals’ of dubious vintage sung by flashily-dressed singers in dimly-lit, smoke-filled rooms? How modish is it to say, ‘I love Urdu, especially Ghalib,’ when one might actually remember more Shakespeare or Wordsworth than Delhi’s pre-eminent poet?

Or, how wannabe is it to sway, without having a clue to its import or meaning, to the sheer sonorousness of Urdu poetry when read or recited with vim and vigour in salons and soirees? Or worse still, must the route to mass popularity of a language and its literature necessarily lie through Bollywood studios and popular film lyrics? More importantly: what happens to a language when it is spliced from its script?

While there are no easy answers to any of the above, it is equally hard to write an obituary of Urdu. For far too long, the doomsayers have been predicting the end of Urdu and a whole way of life that accompanied it. The Urdu−Hindi debate has divided Urdu-wallahs and Hindi-wallahs into warring champions occupying opposite ends of a Great Divide, a bit like wrestlers in a wrestling pit (akhada). Yet, despite the formidable odds stacked against it, Urdu has not merely survived but flourished. Yes, fewer people read it in its own script. Yes, its propagation is not tied to employment generation. Yes, the government has paid mere lip service to safeguarding its interests. Yes, many of those who nod their heads in appreciation when they hear Urdu poetry being read or recited possibly do so because it sounds pretty rather than because they fully understand the real meaning of those mellifluous words. But that is not to say that Urdu is dead, or dying. Despite the odds, Urdu has not merely survived but remained relevant. It is still the language of the heart and soul of India.

The following excerpt from Rakhshanda Jalil's book, But You Don't Look Like A Muslim has been published with permission from HarperCollins India. The hardcover of the book costs Rs 599.