US Election Results 2020 Latest News LIVE Updates: Trump has accused Biden of "rushing to falsely pose as the winner.""This election is far from over," he said in a statement. 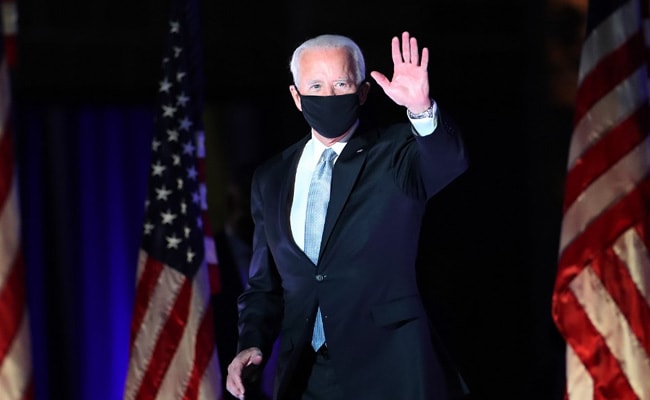 US Election Results 2020: Joe Biden, 77, will become the oldest president-elect in US history

Joe Biden's victory in Pennsylvania took him well past the electoral college threshold of 270 votes. The former Vice President would become the oldest president in US history at his inauguration, aged 78.

Trump has accused Biden of "rushing to falsely pose as the winner.""This election is far from over," he said in a statement.

Mwanwhile, congratulations poured in from abroad, including from conservative British Prime Minister Boris Johnson, Canadian Prime Minister Justin Trudeau and German Chancellor Angela Merkel, making it hard for Trump to push his repeated claims, without evidence, that the election was rigged against him.

Here are the LIVE updates on US Presidential Elections 2020 Result:

Belarusian opposition leader Svetlana Tikhanovskaya has congratulated US President-elect Joe Biden on his victory, saying she hopes the two can meet soon.

"The whole world watched the elections in the United States -- a country with a functioning democracy," Tikhanovskaya wrote on her Telegram channel on Saturday.

Ties with US to deepen after Biden win, says Afghan president

Afghan President Ashraf Ghani said that ties between Kabul and Washington are expected to deepen in areas of counter-terrorism and building peace as he congratulated Joe Biden on his election victory.

"I look forward to working with both of you to further strengthen the special alliance between the US and Israel," Netanyahu wrote on Twitter, referring to Biden and vice president-elect Kamala Harris.

Netanyahu, whose Twitter account features a picture of himself seated next to Trump, said he and Biden had "a long and warm personal relationship for nearly 40 years, and I know you as a great friend of Israel." 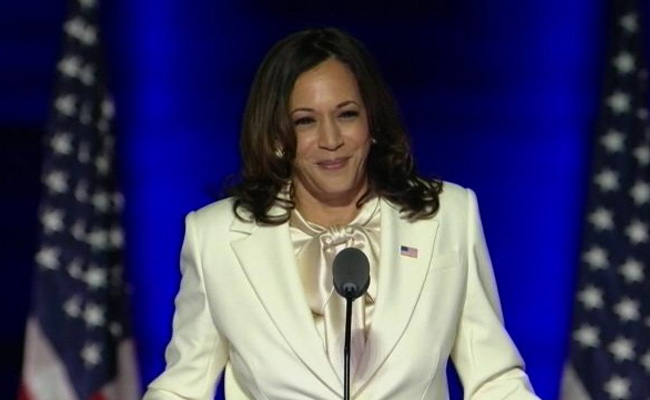 In her national address with president-elect Joe Biden, Kamala Harris -- daughter of breast cancer specialist Shyamala Gopalan from Tamil Nadu -- paid tribute to her late mother, who "believed so deeply in an America where a moment like this is possible".

Tamil Nadu:State Min R Kamaraj offers prayers at a temple in Thulasendrapuram,native village of US Vice President-elect Kamala Harris,for her victory in US polls.

"A woman hailing from this small village now holds one of highest positions in US. It's a proud moment,"says Kamaraj pic.twitter.com/MnKSDPl9jy

Congress President Sonia Gandhi has congratulated US President-elect Joe Biden for his victory in the US elections and Senator Kamala Harris on her election as the next Vice President. 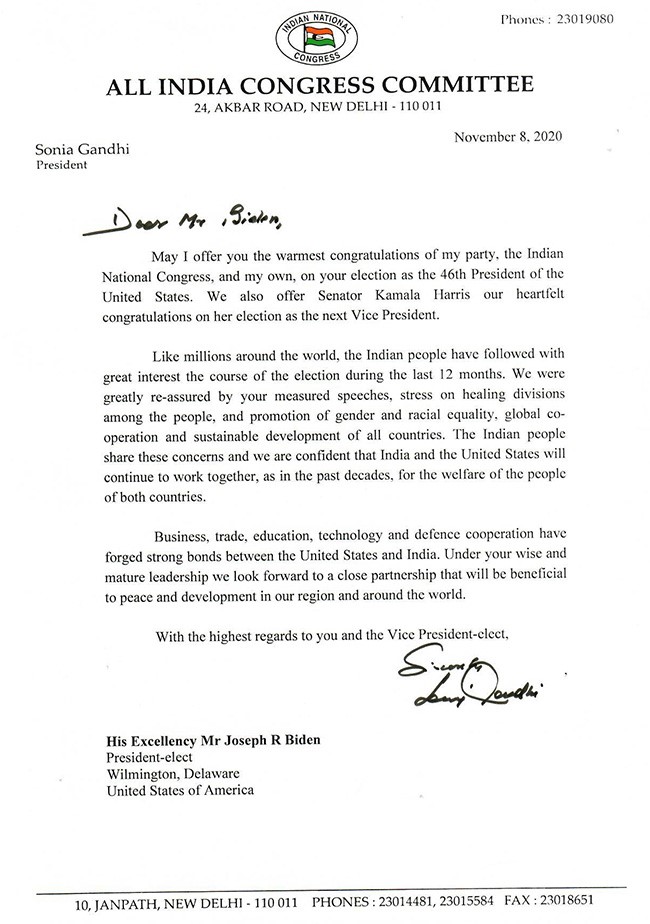 In a tweet, Mr Palaniswami expressed joy over Harris becoming the first woman to be elected as vice-president of the US following her "astounding victory."

"My heartfelt congratulations to @JoeBiden who has been elected as the 46th president of United States," he said.

Sri Lankan President Gotabaya Rajapaksa on Sunday congratulated US President-elect Joe Biden on historic presidential election victory and said he looks forward to working with him to strengthen the bilateral relations between the two countries.

"Congratulations! president @JoeBiden on your historic victory. Look forward to working closely with you to strengthen the bilateral relations between our two countries," Rajapaksa tweeted.

West Bengal Chief Minister Mamata Banerjee on Sunday congratulated US president-elect Joe Biden and vice president-elect Kamala Harris for their victory in the elections. She also hoped that the friendship between the US and India will grow.

Vice President M Venkaiah Naidu on Sunday extended greetings to US president-elect Joe Biden and vice president-elect Kamala Harris on their "remarkable" victory in the elections, expressing confidence that Indo-American relationship will become stronger in the coming years.

Venezuela's political rivals Nicolas Maduro and Juan Guaido on Saturday both congratulated Joe Biden on his victory in the US presidential election.

President Maduro, whose regime was hit with multiple new sanctions by the Donald Trump administration, wrote on Twitter that "Venezuela ... will always be ready for dialogue and understanding with the people and government of the US." 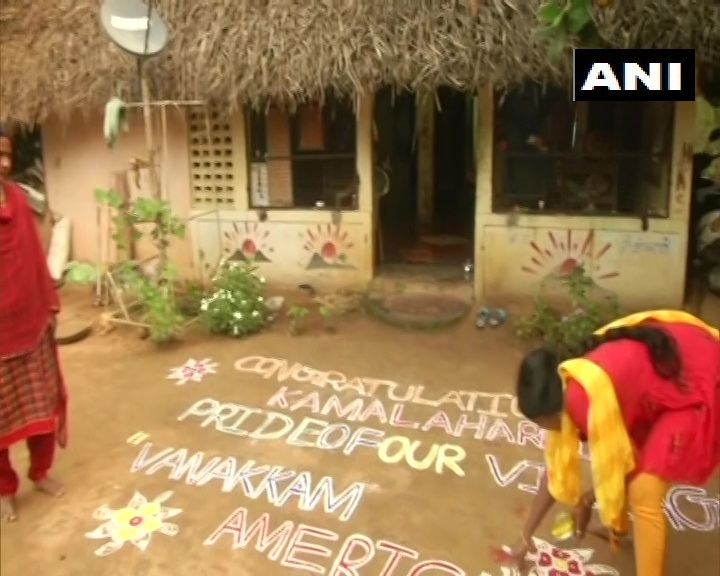 Women in Thulasendrapuram, the native village of US Vice President-elect Kamala Harris make 'rangoli' to congratulate her on her election win. Ms Harris is first Indian-American to become US Vice President.

Born to an Indian immigrant and a Jamaican-born father, Kamala Harris is a Christian, but also attended Hindu temples with her mother. (Pic credit - ANI)

To beat this pandemic.
To rebuild our economy.
To root out systemic racism in our justice system and society.
To combat the climate crisis.
To heal the soul of our nation.

The road ahead won't be easy. But America is ready. And so are @JoeBiden and I.

World leaders have started congratulating Joe Biden on the historic win. Prime Minister Narendra Modi, in his congratulatory tweet to US President-elect, said that he looking forward to working closely with Mr Biden.

Congratulations @JoeBiden on your spectacular victory! As the VP, your contribution to strengthening Indo-US relations was critical and invaluable. I look forward to working closely together once again to take India-US relations to greater heights. pic.twitter.com/yAOCEcs9bN

Trump, who has made repeated claims of electoral fraud without providing evidence, immediately accused Biden of "rushing to falsely pose as the winner."

Winning the battleground state of Pennsylvania's 20 Electoral College votes gave the former vice president more than the 270 he needed to triumph, prompting all major TV networks to declare him victor came after four days of nail-biting suspense following Tuesday's election.

"I am honored and humbled by the trust the American people have placed in me and in Vice President-elect (Kamala) Harris. In the face of unprecedented obstacles, a record number of Americans voted," Biden said on Twitter. "With the campaign over, it's time to put the anger and the harsh rhetoric behind us and come together as a nation. It's time for America to unite. And to heal."

US Democrat Joe Biden captured the US presidency on Saturday as voters narrowly rebuffed Republican incumbent Donald Trump's tumultuous leadership and embraced Biden's promise to fight the coronavirus pandemic and fix the economy in a divided nation.

France Will Remember Dominici Then Focus On Beating Italy

COVID-19 vaccines: When and how will become available; explained

Melania to divorce Trump? She won’t leave Trump until January due to this reason

Covid-19 Cases are Rising in Asia, but Compared to West it's a Drop in the Ocean

Coronavirus mutations not leading to increase in spread of infection, says study

All Blacks Make 3 Changes For Rematch With Argentina